Do you think a work of art’s valuation is driven by how many times its photo has appeared in 33 art history textbooks published between 1990 & 2003? Economist David Galenson, according to the New York Times (article here), has a new book out ranking the top art works using just that method. Since the most famous works of art are rarely sold, he decided that the next best indicator of a work’s importance was to count up how many times it had been reproduced in textbooks. Explaining his thinking on this, Galenson says, “Important artists are innovators whose work changes the practices of their successors, the greater the changes, the greater the artist.” This seems a bit too black & white for me... but first, here's Galenson's list of the top ranked works:

As you can imagine, many critics don’t agree with this method, saying that it is too limited (among other things). Arthur Danto, for example, points out that there is much more diversity in recent textbooks. Galenson’s answer to his critics is that they “don’t see the value in quantitative methods.” While many of these works may have helped establish various art movements, some of them aren't well known outside art history classes. I won't repeat the whole article here, but there's a pretty lively critical debate if you are interested.

For myself, I can see some merit to this. The art world and its institutions are one big network, constantly reinforcing ideas of what’s “important” or valuable. For better or worse, we all refer back to the same cannon. So, the textbook idea does make sense. On the other hand, there’s so much more going on that makes art influential. Just to round things out in terms of publications, one should include reproductions or citations in academic journals, magazine articles, or other art books. I also think it's odd that he doesn't mention the classical works that formed the basis of our visual language (for example, it's hard to believe the Mona Lisa or the Birth of Venus aren't in the top 8). What about Monet and Turner? Cezenne? What about the rest of the world? Asian & African art was very influential, plus great art in their own right. Galenson doesn't explain his criteria in the NYT article, so I guess I will have to read his book and see if he makes a convincing argument.
Posted by kmunson at 11:15 PM No comments:

Email ThisBlogThis!Share to TwitterShare to FacebookShare to Pinterest
Labels: museums

Syndicate, a project celebrating unionized workers in San Francisco performance and art spaces has been included as part of the GroundScores component of Bay Area Now 5, showing at Yerba Buena Center for the Arts from 7/19/08-10/13/08. The walking tour features street stencils of historic photographs in front of theatres and museums both downtown and at civic center. Some of the stencils are also shown in the gallery exhibition, which also includes a video by Jessica Tully (video/stencils/performance artist) along with photography by Tom Griscom & Wendy Crittenden. Kim researched & coordinated this project, including the city permits process and writing & recording parts of the podcast.

There will be a guided tour with Kim, Jessica, Catherine Powell (from the SFSU Labor Archives, another collaborator) and other guests from noon to 2:30 on Sat, 10/4. Get tickets for the tour on YBCA's web site.
Posted by kmunson at 5:18 PM No comments: 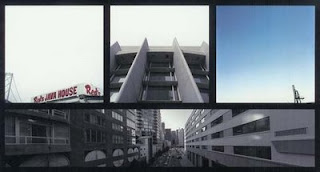 Drawing on the research, archival photos, and maps collected in the SFSU Labor Archive's upcoming Labor Landmarks book,and their own visits to these sites of historical importance to the San Francisco labor movement, Crittenden (color) and Griscom (b&w) have created intriguing contemporary views of those sites in their contrasting yet complimentary styles. Photography is completed, we are assembling a package to find a home in the bay area for this show. We plan a gallery exhibition coupling this series of large scale photographic works with related historical information and period photos. There is a pdf of our proposal on my archive page.
Posted by kmunson at 8:20 PM No comments:

I just paid my yearly visit to San Diego. The Comic-Con crowd is apparently the largest ever, estimated at 135,000 attendees (my guess is more). I've heard rumours that the Con might someday move to Vegas or LA if San Diego can't come up with a way to accomodate the increasing crowds, I hope this doesn't happen. In LA and Vegas there are all kinds of distractions, in San Diego we can focus on the Con.

I hate to say that I missed my chance to see Hugh Jackman, Gerard Butler, the Watchman panel, and all the other amazing treats the Hollywood studios shipped down to San Diego. The lines were so overwhelming that we pretty much gave up on Hall H throughout, worried that we would spend so much time in line that we would miss everything else.

For me, it’s the “everything else” that is the most interesting. So here’s a list of other events and panels that made this year’s Con, crazy as it was, an experience not to be missed.

At the top of my list are two of my favorite writers, Ray Bradbury and J. M. Stracznski. I’ve loved Ray since high school. He’s 88 now and still inspiring. At one point someone in the audience asked him how it felt to know that he inspired several generations of writers, and he looked out at us and said, “yes, you are all my bastard children, and I love you all.” JMS is definitely a bastard child of Ray B. As usual he began his session with a ten minute “state of JMS” talk and then spent the rest of his hour answering questions from the floor. Of particular interest to me were his stories about Babylon 5, as I'm a big fan and there were 6 people convincingly dressed up as cast members in the second row.

My most prized swag was a detailed storyboard from the first animated Avengers movie depicting Ultimate Thor, signed by Stan Lee. We also bought 6 new pages of original artwork; a Red Sonia page by Joyce Chin; an Ultimate Thor page by Greg Land (from the Ultimate Power series); 2 current Wonder Woman pages, one by Aaron Lopresti and one by Ron Randall. We also got 2 early Witchblade pages drawn by Michael Turner.

One of the saddest, yet sweetest events of the con was the tribute to Michael Turner. Against a backdrop of slides, his friends, fans and family got up and talked about what MT meant to them. Mark Silvestri told a funny story about MT first coming to Top Cow. MS asked MT to draw a building, he worked at it very earnestly and came back with something that looked “like a loaf of bread.” MS found a book of Manhattan architecture and said copy this. He worked at it earnestly and returned with a fabulous MT style drawing, saying “no one had ever told him it was ok to look at a picture before.” The rest is history. I still hope to include Turner’s work in the “Looney Lineage” show I’m co-curating in 2010, it would be an honor to have him.

It seemed like every sixth guy was dressed as the Joker this year. Oddly the one that looked the most like HL wasn’t at the Con, he was the host at the Hard Rock. It was really fun to see a crew set up a whole park full of clay warriors to promote the new Mummy movie across the street from the convention center.

Marc, the Sci-fi channel junkie, got the fanboy trifecta – Amanda Tapping (Stargate/Sanctuary), Katee Sackhoff and Trisha Helfer (Battlestar Galactica). Of course he enjoyed seeing the rest of the cast of these shows too. Another favorite was the Dollhouse/Dr. Horrible panel with Joss Wedon, Kevin Smith, Eliza Dudku, Neil Patrick Harris and Nathan Fillion.

Fillion also appeared on the DC animation panel, as he was the voice of Steve Trevor in the upcoming Wonder Woman movie – which looks great! Not so great was a panel on Hamlet 2. The clips looked fun, but the cast, producer and director looked stiff and uncomfortable. The movie was heavily promoted, with 5 or 6 guys dressed as “sexy Jesus” walking around the Con together. The panel was anticlimactic. Another disappointment was a panel featuring fantasy writer talking about folklore and mythological beings (angels, werewolves, etc…). Somehow the questions never seemed to get below the surface.

Being an art historian, I enjoyed many of the Comic Arts Conference panels organized by Peter Coogan. The best one I saw was on “Reinventing the Superhero” with presentations by Charles Hatfield (CSU-Northridge, writing about Kirby & Fantastic Four), Dana Anderson (Maine Maritime Academy, writing about the X-Men and lobbying for a character research database, and Seth Blazer (University of Florida, writing about the American public’s attraction to superheroes post- 9/11). Another treat, at the end of the day on Sunday, was the Deepak Chopra/Grant Morrison panel. Always focused on the BIG picture these two loosely talked about the spirituality of superheroes in our violent and confused world.

It was beautiful in San Diego, I actually managed to get out to see the Georgia O’Keeffe show at the San Diego Museum of Art and have some fabulous cucumber mojitos at the Prado restaurant. Other good drinks were had in the beautifully remodeled bar at the US Grant hotel. On the whole, a great trip.
Posted by kmunson at 5:58 AM No comments: