I lived in Hollywood through most of the 1980's. While I was in LA for a conference last week, I visited my old neighborhood. One of the things I most wanted to see again was my Uncle Monte Blue's (1887-1963) star on the Hollywood Walk of Fame. He married Betty Jean Munson, my father's oldest sister in 1959. My parents said I was introduced to him while I was a baby, although I don't remember. I took a few cell snaps of his star at 6286 Hollywood Blvd (Hollywood & Vine), where he was enshrined on February 8, 1960.

Uncle Monte had an all American rags-to-riches story.  Half French, half Cherokee, his birthname was Gerard Montgomery Bluefeather.  Born in Indianapolis, he was placed in an orphanage as a child, yet he persevered, making it through Purdue University and excelling at all sports and physical activities. According to a story in the Blue Book of the Screen (1923), Blue was discovered by director D.W. Griffith while working as a day labor on the set of The Birth of a Nation (1915). Griffith observed him one day, up on a soapbox giving a heated speech about capital and labor.  Later, when another actor playing the part of a stump speaker wasn't sufficiently inspiring, Griffith remembered Blue and gave him a chance.  He continued on in supporting roles until his breakthrough role as the hero Danton in Griffith's French Revolution era epic Orphans of the Storm (1921) opposite the Gish sisters, Lillian and Dorothy. He was the romantic lead in a long string of silent films through the 1920's.  He successfully made the transition into "talkies" and continued to work as a character actor for film and television. One of his best remembered roles was as the sheriff in Key Largo, the 1948 film noir film directed by John Huston starring Humphrey Bogart, Edward G. Robinson, Lauren Bacall and Lionel Barrymore. He retired from acting in 1954. He suffered a fatal heart attack while visiting Wisconsin on business in 1963 (Filmography).

My Aunt Betty Munson Blue, his widow, taught oil painting, and owned an art school in Beverly Hills on Wilshire near Doheny, a block from the Academy of Motion Pictures Arts and Sciences building at 8949 Wilshire. She relocated to Florida in her later years.

I have recently discovered that the house he lived in on N. Roxbury in Beverly Hills was sold to George Gershwin, who lived there for a year, during which he composed Rhapsody in Blue. It was later sold to the singer Rosemary Clooney, she kept it for 50 years and was demolished. Story/photos at this link http://www.georgegershwinhouse.com/ 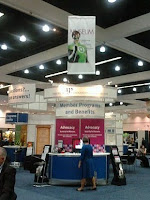 at Skylight Books. There was a panel moderated by the editor, Ben Schwartz which included critics Brian Doherty & Bob Fiore, and artists Sammy Harkham, and Joe Matt.  It was interesting to hear the wide range of opinion expressed about criticism and it's worth, and the bookstore itself was amazing. I'm surprised I didn't need an extra suitcase!
Posted by kmunson at 7:44 PM 1 comment:

Kosmic Trip at the Grammy Museum

Finally made it to the Grammy Museum at LA Live.  Strange Kozmic Experience, a special exhibit they had featuring material related to The Doors, Janis Joplin and Jimi Hendrix was definitely worth a look.  Aside from video, clothes and all the memorabilia you would expect in an exhibition like this, there were some nice surprises.  Somehow, the fact escaped me that Janis Joplin thought of herself as a painter as much as a musician. The exhibit included a wall of large canvases painted by her featuring stylized, angular figures. It was great to see R. Crumb's sketches of her along with the Cheap Thrills album cover. Also on display were several letters Joplin had written to her mother and I was shocked to recognize that I had the exact same boxed stationary back in high school (ivory with a multi-colored filigree in the corner).  As I looked at her wild, loopy handwriting, this odd connection humanized her for me, and I ruminated on how young Joplin, Hendrix and Morrison were when we lost them (all 3 died at 27).  Standing before a wall of Fillmore posters, I couldn't help thinking about all the years I worked for Winterland Productions (the licensed rock t-shirt manufacturer) and how, decades after their deaths, the legacy (and merchandise) of these artists is still such a source of fascination and nostalgia.

Many photographers were included: David Gahr, Elliott Landy, Lisa Law, the late (and great) Jim Marshall and Bob Seidemann. The photos that helped establish the identities of the Doors (the Morrison Hotel) by Henry Diltz and the "young lion" portraits of Jim Morrison by Joel Brodsky were of particular interest to me, because I had seen such perfect prints of them in sequence before.

In general I thought the rest of the museum was well done, aside from a bit of a sound bleed problem.  There were displays exploring the roots of most of the major genres of music, along with a nifty interactive time-line that allowed a fun and easy exploration of the interrelationships of the music of different eras and the key artists.  I was happy to see displays about songwriters and their methods, and about studio musicians and recording studios.  People that play the Rock Band video game would probably love the interactive Roland Live exhibit. The museum also featured a large touring exhibit about the legacy of Michael Jackson. I was fascinated to see the gloves and costumes in real life, trying to get an idea of who he really was under all those sequins. Again, I found myself drawn to his handwritten lyric sheets, contemplating the evidence of his personality and inspiration left behind on these documents, which were probably the most directly personal things there.

Of course, the Grammys and the telecasts got a lot of real estate.  You could hear about production logistics, see costumes and lists of winners, and watch outstanding performances.  As a past president of the SF chapter (1992-3), I attended a few of those shows in LA at the Shrine and at Radio City in NY.  In those days, I don't think NARAS was organized enough to support an institution like this, and I was glad to see this change for the better.
Posted by kmunson at 5:59 PM No comments: