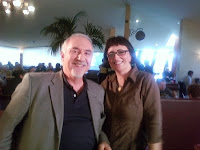 My lovely husband, Marc Greenberg, will be on KRON's "Best of the Bay" show talking about our home-away-from-home the Boulevard Cafe, in Daly City near Westlake Village.

Marc is pictured here with Patty Zubov, a Producer from Platonic.TV who shot the segment with her crew at Boulevard. There are also short bits of the owners talking, and Marc & I marveling over their gigantic shrimp cocktail. At the moment, we aren't sure when these segments will air, but I will post again when we know.
Posted by kmunson at 2:42 PM No comments:

This is just a small sample of the sights of San Diego Comic Con. Thursday night Marc, Michael Dooley and I had lovely dinner outside at a very nice Italian place called Chianti. While we were eating, a group of women dressed as girl scouts roller skated by. They were followed by approx. 200 people dressed as zombies, who marched down to the convention center and back demanding "brains" from everyone they met. LOL! See photos here!
Posted by kmunson at 10:33 PM No comments:

One more post to wrap up the rest of the doings at Comic Con. There was really so much going on that it made more sense to write about it in chunks. I keep reading articles saying that one of the underlying reasons for the huge success of the Con is the interaction that fans get with the creators and stars of various types of pop media.

Sometimes it's just straight-ahead pride in the geek nation. Although SDCC has outgrown some of the geek/nerd stereotype since the Hollywood invasion a few years ago, there are moments that still take me right back to the Con's roots. On Saturday, Marc & I caught the end of a panel with the creators of Green Lantern, and they ended the panel with 2,000 people standing with their fists raised reciting the Green Lantern oath from memory: "In brightest day, in blackest night, No evil shall escape my sight, Let those who worship evil's might, Beware my power, Green Lantern's light!" Of course, Marc and I were reciting right along with them. It was touching, and entirely appropriate, as the next person featured on that stage would be a man who has brought much light to the world, Ray Bradbury.

Ray (center of photo), is 89 and claims to have not missed a Con in San Diego throughout its 40 year history. Our joy in seeing him was slightly marred by what seemed like an endless stream of product announcements, taking up the first 20 minutes of the session. But when Ray finally got to talk it was magic. He brought a DVD of himself being interviewed by Mike Wallace on CBS News (w/W. Cronkite) on the night of the moon landing 40 years ago. It was great to celebrate that moment with Ray, and to see Cronkite again. Ray spoke about the need to help young children learn to read, and endorsed comics and other illustrated books to do the job, saying "I want Calvin and Hobbes in every classroom."

This lovefest was followed by another with the writer J. Michael Straczynski, who is originally from San Diego and absolutely loves the interaction with the fans. His Q & A sessions are both enlightening and funny. In different ways, J. and Ray have the same advice, "love what you do, and don't be afraid to fail." I finally got to meet JMS face-to-face for a signing, and of all things I blurted out the story of Ray and the moon landing. Who knows, maybe this was the story he needed to hear. He seems like a truly nice person, and I was happy to finally meet him. 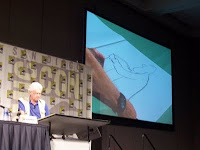 Another session honored the great editorial cartoonist Pat Oliphant, who has been gracing the editorial pages of newspapers and magazines since the Nixon era. At this session he was given the "inkpot" award, a life-time achievement award for cartoonists. Throughout the session he drew in charcoal, one political caricature after another, Nixon, Agnew, Condi, Cheney, Bush, Clinton, Obama, even Palin getting screwed by a moose. It was incredible to see his mastery over his medium and materials. This is an creative area people don't think of when they think of Comic Con, but every year they feature several panels and focused sessions with legendary political/editorial cartoonists.

There were more great comics creator panels this year than I can possibly mention, some of the best I attended were the Underground Comics panel, with Denis Kitchen and Trina Robbins, pictured on the left. Trina did an excellent presentation on her Nell Brinkley project which is still at the Cartoon Art Museum in SF. There was the annual Jack Kirby Tribute panel; a panel on graphic novels with many of the artists currently doing great stories and cutting edge work like Seth, Gene Yang and Jason Lutes and a panel about the work and legacy of the "Mad" genius Harvey Kurtzman. At the wild and crazy Aspen Comics showcase, I heard the latest scoop on the company's recovery after the unfortunate loss of their founder, artist Michael Turner, and their plans to capture some of their properties on film (Fathom and Soulfire are both being developed with major studios/production companies).

Of course, we also jumped on the opportunity to add to our collection of original comic book pages. I was happy to acquire additional artwork drawn by Joyce Chin (Red Sonja, Witchblade) pictured with me on the left, and Wonder Woman artist Aaron Lopresti. I'm sure our ever-growing collection will always contain work by them.
Posted by kmunson at 6:39 PM 1 comment:

Things you would never plan on happen at SDCC. You put 120,000 people that love pop culture in one (LARGE) building, throw in celebrities, comics, games, costumes and anything else you can imagine and it's quite a mix. To tell the truth, I've never really gotten into the Hollywood aspects of Comic Con. Not that I'm immune to the spell of Hollywood, it's exciting to hear about the new shows and etc, and I do manage to check in on some of my faves, but mostly Marc ends up at the Hollywood panels and I end up listening to writers and artists, prowling the exhibit floor looking for additions to our art collection.

Saturday, I was on my way through the central pavilion on my way to another panel when I saw Kevin Sorbo, star of Hercules and Andromeda. No one had really noticed him yet, in the midst of all the chaos of the moment, and he was just sort of hanging out watching the crowd in amazement, waiting to sign autographs.

I may be be the only person that has ever personally thanked him for making Kull the Conqueror in 1997. But I felt compelled to tell him my story: In 1997, Marc & I went back to see my Dad in Northern Michigan for what turned out to be a very stressful visit. Afterword we continued our vacation in New York. I will never forget going to see Kull at the Loews Manhattan, overlooking Times Square and thinking "I can finally just relax and enjoy this movie." I think it was followed by many martinis...

At the end of this story, he looked at me and said "Where in Michigan?" I said, "Manistee. I live in San Francisco now, but I grew up there." It turns out that he just shot a film there called What If , and we were both blown away by the coincidence. Manistee is a tiny resort community of 25,000 souls perched on the shore of Lake Michigan. "I'd never heard of this town before I went there on location," he said, "and now here you are. It's a pretty little Victorian town, and I played a game of golf there for my children's charity A World Fit for Kids." He also mentioned that, counting What If, he has 6 movies coming out. Sorbo seemed like a very sincere guy, and I was glad I met him.

Marc has much more celebrity news than I, as he made it to panels for Smallville, Farscape, Sanctuary, Marvel Animation and Eureka.... and he met Leonard Nimoy! But these are his stories to tell. Live Long and Prosper!
Posted by kmunson at 5:50 PM No comments:

Marc & I both spoke at San Diego Comic Con this weekend. As usual, it was an amazing experience, and we have all kinds of stories. This year the Comic Arts Conference, hosted yearly at Comic Con since 1998, was very well attended and featured 16 panels on a wide range of topics.

I was on the Sunday afternoon panel, Comics in Museums, with Michael Dooley and Denis Kitchen. I presented my new research about The Comic Art Show (Whitney Museum, 1983). You can see the presentation in the slideviewer widget at the bottom of this page. My paper on this topic is in progress and I hope to finish it this fall. Co-presenter Michael talked about High & Low (MOMA, 1990) & Masters of American Comics (Hammer/MOCCA, 2005). Denis talked about some of the initial problems comics faced in the art world enviroment, and then about Underground Classics, a show he just co-curated in Madison WI.

A lively Q&A session followed, but we were pleasantly surprised that the artist selection in Masters wasn't the main topic of discussion as it often is after this sort of panel. Instead, many of the questions had a more businesslike slant. "Are artists able to get more money for their work because of the exposure they get from museum shows"? "Is it easier for a comic artist to crossover into gallery art, or a gallery artist to become accepted as a cartoonist"? "Why did museums seem to resist the narrative function of comics"? Conversation continued and spilled out to the hallway afterword. Thanks to Pete, Denis and Michael for their input and a great experience. If you are one of the people that came to me for more information after the panel, you can find my paper Beyond High & Low, which summarizes many of the events and issues we discussed, on my archive page.

Marc also had a good response to his presentation on the cases of CBLDF and the 70 year (and still not resolved) Superman copyright case. We were amazed to learn that Denis, my co-presenter, founded CBLDF! Small world...
Posted by kmunson at 5:05 PM 1 comment: