Marc and I have been invited to speak at the Comics Arts Conference (in conjunction with the Institute for Comic Studies) at San Diego Comic Con this July. SDCC is an event we really look forward to every year, and we are thrilled to be part of it, even if we are the nerdiest of nerds (being an official egghead at a sci-fi convention is quite a distinction). I'll post more as the schedule is announced.
Posted by kmunson at 5:59 PM No comments:

Gone with the Wind is on my mind… several small occurrences have reminded me of it lately. It was my mom’s favorite movie while I was growing up. The local movie theatre, The Vogue, would get it for a couple weeks every year. We’d always go together. We knew all the lines, and would talk back to the screen (oh no, Miss Scarlett, don’t drive that buggy through Shantytown…). We always felt guilty getting popcorn at intermission right after poor Scarlett ate those raw turnips right out of ground and hurled. There are of course, stereotypes in this movie that make us cringe now, but it’s still a spectacular, emotionally involving film, with a lot of memories attached. I lost my mom to cancer while I was a teenager, and it was hard to see GwtW without her for awhile, but I read the book several times in high school. A few years ago, Marc and I were in Atlanta for a conference, and I went to the Margaret Mitchell museum, which encompassed the author's home and library, as well as a large adjoining building that housed a museum about the movie. Atlanta also had a wacky restaurant called Pittypat’s Porch that had a great memorabilia collection (and the heaviest food I've eaten in years).
GwtW won best picture at the Academy Awards in 1940 (actually 10 of 13 nominations, a long-standing record). The ceremony was in the Coconut Grove Ballroom at the Ambassador Hotel in LA. The awards were also held fairly often at the Biltmore Hotel (where I stayed last week) during the 1930's & 40's. Off the lobby, the Biltmore has a hallway with photos of the various ceremonies (which were set up more like the Golden Globes back then) including photos of Clark Gable and other stars of the film.
Yesterday, Marc was speaking about copyright, and he mentioned how Turner Classics “colorized” many films so that Turner would still hold rights to that version after the original fell into public domain. I started thinking about all the endless re-masters, re-releases and special editions of GwtW, and this makes me think that the rights are probably safe for a long time. Marc also talked recently about the controversial book The Wind Done Gone, a parody of GwtW by Alice Randall that sees the events from the slave’s point of view.
I think this may be a generational obsession. Does anybody else have stories about this film?
Posted by kmunson at 8:39 PM No comments:

Email ThisBlogThis!Share to TwitterShare to FacebookShare to Pinterest
Labels: movies

Marc & I both spoke at the annual WonderCon comics & pop culture convention on Sunday, which was held this year at Moscone Center in SF. Thanks to Peter Coogan of the Institute for Comics Studies for inviting us, and to Kate McClancy for her help. We really enjoyed doing it, and appreciated the opportunity to answer questions and interact with our fellow comic nuts. I spoke, as Pete wrote in a promo article, about "the importance of comics to contemporary visual culture and the central role of the 2005 Masters of American Comics exhibit in breaking comics out of the art world's high/low debate." Marc spoke about several cases defended by the Comic Book Legal Defense Fund and gave an in depth talk about the recent Superman copyright case. Bravo to Marc for explaining this complex case in a manner that non-lawyers could understand.

We’ve been going to WonderCon since it was a few booths crammed into a couple rooms in the basement of the Oakland Convention Center and are always amazed how much its grown. This year WonderCon featured panels and screenings about upcoming films like The Watchmen, the relaunch of Star Trek, Terminator Salvation and Pixar's UP, plus artist talks and sessions with comics publishers. The masquerade and anime festival are also popular attractions.

I missed most of it this year because I was in LA for CAA and just flew back to speak on Sunday, but Marc did surprise me with a 2 foot tall talking figure of Treebeard, one of my favorite Lord of the Rings characters, so I didn’t leave empty handed.
Posted by kmunson at 5:13 PM No comments:

The College Arts Association (art historians and studio art professors) just held its annual conference at the Los Angeles Convention Center last week. It was a great conference this year for reasons both professional and personal. 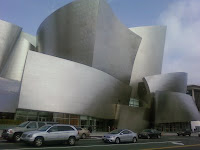 On the personal side, I lived in LA from 1979 to 1987 and again for a short period in the early 90’s. I hadn’t been back for a long time. I didn’t have time to get away from downtown, but I enjoyed seeing the new-ish Walt Disney Concert Hall, and the rest of the LA music center, where I used to work in the early 80’s. My collegue Denise and I stayed at the Millennium Biltmore, a classic deco/Moorish hotel that hosted the academy awards back in the 1930’s, and hosted many official Grammy afterparties in 90’s when I was involved with NARAS, so on the whole it was a real trip down memory lane. I enjoyed it and want to go back soon. Also, more friends from SF were able to participate this year, which made events like the open houses at UCLA (Hammer, Fowler and Broad Art Center) and LACMA a lot more fun (plus Vodka, etc...). Staples Center and the new LA Live complex really added a lot to a part of downtown that used to be a scary no-man's land around the convention center.

In my opinion, I thought the panels this year were better thought out and more useful than those of the previous year. Also, the level of participation in LA contrasted with last year in Dallas was significant. Not only was there a greater selection of topics and speakers, but there was also a greater selection of events and many more publishers represented in the book fair (like I need more art books…).

Denise and I agreed that the best session of the conference for us was a presentation about the restructuring of the Detroit Institute of Arts (DIA, which I’ve blogged about previously). Graham Beal (Museum Director) and Nancy Jones (Exec Director of Learning and Interpretation) told us how the staff of DIA evaluated their member’s viewing habits in the museum, and how they reorganized the museum’s galleries to enhance the visitor’s experience. They also talked in depth about their successful effort to create more viewer interaction with the collection by adding innovative video. Best of all, neither Beal or Jones stood at the podium and read a paper to us, and seemed genuinely warm and engaging as people.

Every year the NEH and NEA come and talk about their grant and program guidelines for the year. At the NEH session everyone was very open to discussion and supportive of everyone’s needs and projects. There was also a very useful session about publishing for journals, art books, and exhibition catalogs sponsored by the CAA student and emerging professionals committee. Aside from the practical advice imparted in this session, the panelists also explained the complex political interplay between academics, museums and book publishers which was both fascinating and important to know.

Next year Chicago (in February! brrrr).
Posted by kmunson at 4:29 PM No comments: