Will Eisner’s New York: From The Spirit to the Modern Graphic Novel (March 1- June 30th 2011) . MoCCA NY,Curated by Denis Kitchen and Danny Fingeroth.
To Eisner's famous 1940's superhero The Spirit, Central City (a thinly veiled version of New York) was as much a character as any of the humans portrayed. The hero, Denny Colt thought of the city almost as a lover, a nurturing entity that would provide for his needs, even though it was clear that there were villains lurking in the shadows. The life force of New York became even more of a focus when Eisner, inspired by the uncensored and often autobiographical work of the underground cartoonists, leaped into autobiography himself in 1978 with A Contract With God. With this book, Eisner reinvented his career, and in the process became one of the pioneers that helped shape the graphic novel.
Eisner's work is often moody and atmospheric. The emotional landscape of his characters are defined by the sun, the rain, the wind, and the mood on the street. The work is filled with lush historical landscapes and gritty urban neighborhoods. The Dropsie Avenue (Bronx) saga tells the story of how the lives of several generations are shaped by their environment between 1870 and the 1990's.  Eisner begins and ends the story with idealized landscapes- farms & gardens, but the beauty found there is always interrupted by the highs and lows of the people who live there. As the story follows the lives in the neighborhood from farm to high class home to slum, crack house and back to the garden again, Eisner's view changes from wide open spaces to dark, narrow streets and interiors. Even though the neighborhood returns to affordable housing and a community garden at the end, it's clear that it won't last for long.
Eisner doesn't take the contrast to the extreme some authors do, but this idea of the idealized, pure country and the demonization of the dark, evil city has been on my mind lately. In real life, good and bad both happen everywhere, yet there's the myth of the wise, happy rural countryside.  It's an idea that has been with us since the parable of the country mouse and the city mouse in Aesop's Fables, but it seems like a myth that holds a strong attraction for many Americans. Even the "Happy Cows of California" milk commercials have their roots in this concept.

Jeffery K. Johnson suggests that this idea of the idealized rural life may have taken hold through the writings of Thomas Jefferson and his concept of the yeoman farmer.  In Johnson's article The Countryside Triumphant: Jefferson's Ideal of Rural Superiority and the Modern Superhero Mythology (2010), he describes Jefferson's almost Apocalyptic disgust with the industrial centers of Europe and his belief in the virtues of a rural landscape populated by wise gentleman farmers.  Johnson points out the many ways that this notion has been enshrined in popular culture, and ultimately uses the contrasting examples of Superman and Batman to make his point. Batman lives in the dark shadows of Gotham City, driven by the idea of indirectly avenging his parent's murder in a dark alley. Superman's positive outlook is formed by the home-spun values instilled in him by his adopted parents, the Kents, and he seems to carry an idealized Kansas within him, no matter how dark things seem.

It's this subtext, the yeoman farmer myth, that Eisner masterfully plays with and against in his characterization of the life cycle of a Bronx neighborhood. The young bride who ultimately returns to save the neighborhood, is given 2 acres of land in Winchester for a garden/farm as her wedding gift.  As the neighborhood grows darker and more violent over time, the contrast with the idealized "other place" outside of the city is always under the surface. Only New York provides a canvas big enough to fully explore the dramatic lives of Eisner's characters.

While checking out the March issue of ArtNews this morning (the photography issue), I was pleasantly surprised to see a couple of short reviews of comics.  Even though comic art has slowly worked its way into the museum world, I am painfully aware that it still has a long way to go.  It was nice to see mention of these graphic novels in ArtNews, a mainstream art magazine who would have never thought comics worth mentioning ten years ago.

The art world, ever narcissistic, prefers to hear about comics that mirror and comment on the concerns, habits and stereotypical people found in museums and art world culture. It seems almost myopic in the case of  The Cardboard Valise, the first book published in ten years by Ben Katchor,which is really about the much larger topic of society’s attitudes about diversity and world culture. Katchor’s black & white, edgy people populate a vast landscape of familiar yet imaginary cities.  When the main character visits a museum (this is the section the review focuses on), Katchor tells us “not to take cultural artifacts too seriously,” by showing us a panel of a young curator from the “Museum of Accidental Art” who insists on taking the character’s pants because they have the “perfect disposition of napkin lint on navy-blue pants; they must be purchased by the state, but belong to posterity.” The ArtNews review is not on-line at this time, but you can see Katchor’s work here & here. Design-wise, I also think it's perfect that the book actually comes in the form of a cardboard valise. 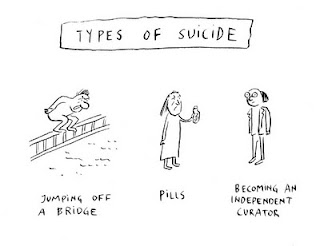 The second book featured is Pablo Helguera's Artoons 3, the latest in a series that lampoons pretty much everything about the art world and museum culture.  Helguera works in the education department of MoMA, and I enjoy his inside view of things. In one panel he shows an archeologist scrutinizing a stone tablet, who turns to his assistant and says "The text is incomprehensible... it must an exhibition catalogue."   He also created a very funny spoof of the classic Chicago Style Manual called The Paulo Helguera Manual of Contemporary Art Style. Hellguera also has an active and cartoon filled page dedicated to his Artoons on facebook.

Also of interest to comics fans are two full page ads by the gallery representing the Icelandic artist Erro, who has been controversial for his too-close-for comfort appropriation of one of Brian Bolland's Tank Girl covers, and an exhibition review of two shows that explore Hello Kitty, and the Japanese craze for the kawaii (cute) esthetic.
Posted by kmunson at 4:44 PM No comments: