A guick post about Fridgeland and Art is Your Voice, Speak Up!, two inspired animations by high school students on display at the Teen Center at the SF Public Library.  Cartoon Art Museum - Talking Points is an after school cartoon and animation training program for students from SF high schools. In the two part class, the students learn scripting and traditional animation techniques, and then learn storyboarding, character design, and how to use software such as Illustrator, PhotoShop and Flash to assemble a short cartoon.

On display at the library were some of the character designs and working drawings for the two cartoons, which were shown on an "antique" monitor/console set-up near-by.  The cartoons were also playing with the sound off, because the voices "disturbed the patrons," although it seems like a simple headset would have solved this problem.  Still, the narrative flow of the stories were clear enough to allow me to follow the plots without dialog, along with a little help from a friendly librarian in that department. 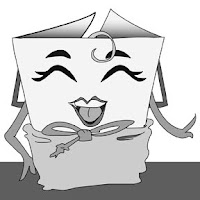 Art is Your Voice, Speak Up! is a simple tale of a shy young boy being inspired by other characters to sing at an audition.  The animation was simple, yet imaginative, and owed much to the Cartoon Network/Farmville Flash game style of animation.  Fridgeland (character at left), the piece created by the more advanced students, is a Toy Story-like tale of food items coming to life while the fridge is closed. These characters, such as a talking slice of cake, Chinese take-out cartons, and various veggies and bottles, all had a hand-drawn quality reminiscent of the style of Yellow Submarine and the Blue Meanies. This animation included a small amount of live action to frame the story, including a scene of the homeowners playing cards in the kitchen unaware of the battle of the condiments going on 3 feet away inside the fridge. I will never look at BBQ sauce and Thousand Island dressing the same way again. On the whole, both animations successfully held my interest, and James Scott Hummel deserves a lot of credit for steering these young students through the collaborative process of creating a cartoon.