Went to the annual Yerba Buena gallery walk on October 16th, and I was really disappointed, not by the art on view, although I didn’t see as much as I would have liked, but by the fact that the galleries were basically empty. It looked to me like the gallery walk drew a pretty sizable crowd of art lovers in the past, but this year, I was often the only one looking.  Also, a few of the galleries I always look forward to checking out, such as SculptureSite on 3rd Street, have disappeared.  The economy must be really tough on independent galleries.

I started at the Cartoon Art Museum and saw the excellent show Graphic Details: Confessional Comics by Jewish Women co-curated by Michael Kaminer and Sarah Lightman, loosely based on an article about confessional comics written by Kaminer for The Forward (a weekly Jewish newpaper).  The drawing styles & storytelling vary widely from underground comix pages of the 60’s to more contemporary work in watercolor. It was like having a glass of wine with interesting and opinionated friends.  See the impressive list of artists represented on the CAM site here. 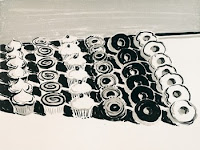 A few blocks away at Crown Point Press, I enjoyed the current Significant Others show, but found myself mesmerized, as usual, by the prints by Wayne Thiebaud in the hallway (Dark Cupcakes and Donuts, 2006 on the left).  Even In tones of grey, his compositions vibrate off the paper. He continues to amaze me. I hope I can make it to see his retrospective at the newly re-opened Crocker Museum in Sacramento before it ends. Catherine Clark Gallery had an astonishing show of the recent work of Masami Teraoka, both his politically charged and erotic ukiyo-e style paintings and his The Last Supper/Pope's Mega Squid Thrust, a very graphic commentary on the weird sexual politics of the Catholic church, done in the style of a gothic altarpiece.
Posted by kmunson at 5:42 PM 1 comment: