The Oddly Compelling Mini-Retrospective of Denis Kitchen will open at MoCCA (NYC) October 5th and run through January. It will consist of approximately twenty hand-selected pieces that will attempt to summarize Kitchen's cartooning career. The focus will be on pieces that appear in the recent Dark Horse book The Oddly Compelling Art of Denis Kitchen,

such as “Working in Geektown,” the Bizarre Sex #1 cover, Major Arcana album cover, “The Square Publisher,” and “Five Minutes with God.” Opening reception 10/1 at Noon, Details on a Q & A session are still to be announced. Denis has worn lots of hats in his career; publisher, founder of the CBLDF, agent, writer, curator, collector and artist. I hope that this is the end of "artist" lagging behind at the end of this list, and that there will be more substantial "Art of Kitchen" shows yet to come.

Even at times when the demands of business take over, creativity will still find a way to leak out. In the case of Denis Kitchen's Chipboard Sketchbook (to be published by BOOM! Studios in October), it took the form of funny and surreal doodles on the chipboard backing of notepads, drawn in Sharpie and fine-point Uni-Ball pens (example on the left).  As a film industry & dot-com vet, I've sat through my share of brain sucking meetings, and I can't help trying to visualize what was going on when Kitchen drew some of these. Among the many wacky animals, winged and fish-headed humans, and all the other stuff, some things jump out. There's a whole drawing centered around $56.00 (the price of a book? dinner? who knows?).  Numerous drawings with knives and sarcastic comments lead me to think that the meetings weren't always pleasant. Other drawings are just fun and wacky; as Denis explains his "demented" drawings are a "stream-of-consciousness" expression, totally spontaneous and unplanned.  I'm looking forward to seeing an exhibition of these too, although I admit, now that I've seen them, I'm going to wonder what he's drawing every time we're on a long conference call :-)

Posted by kmunson at 6:35 PM No comments:

When my friend, author and art historian Hannah Sigur, invited me to a lecture by the architecture and design expert Richard Guy Wilson, sponsored by the Institute of Classical Architecture & Classical America, I wasn’t sure what to expect.  Part of the attraction was that it was being held at the theatre at the new-ish Walt Disney Family Museum in the Presidio, and I still haven’t made it over there. I’m a big animation fan, and it’s been on my to-do list for a long time, but the bay area is rich in fabulous museums. It’s almost a full-time job to keep up… I digress.

The event started with a reception in the lower lobby (as this was an evening event, the rest of the museum was not open to view).  Aside from the good conversation, the other high point of the reception was that the lower lobby seemed to be a tribute to Disney concept artist Mary Blair. The room was ringed with many posters by her, and the pattern set in the floor is based on one of her concept paintings for It’s a Small World.  In a case near the center of the room, I was pleased to see a large paint stand (sort of a combination storage chest and worktable), with some of her tools and art supplies and a pair of her eyeglasses.  Let’s face it, as an artist myself, I’m a sucker for art supplies. I can stare at tubes of paint and visualize how they could be used for hours. In this case, the tubes that were shown seemed to be a good representation of her bright and whimsical color palette.  The display also included some photos of Blair, and a hard hat decorated with day-glo flowers bestowed on her by her colleagues at Disney Imagineering. I tried to snap a photo, but was denied. However, I found this one on the Disney Family Museum web site with an article about the installation of the exhibit.


The Disney Museum theatre itself was interesting. It’s painted with comets, constellations and other space related graphics. For this event the house lights stayed up, but I imagine that the stars and comets probably glow in the dark.  In this setting, we settled in to listen to Wilson talk about “The American Renaissance” period, roughly from the 1870’s through the 1930’s. Wilson is the Commonwealth Professor’s Chair of Architectural History at the University of Virginia (Thomas Jefferson’s University

), in Charlottesville, Virginia. He is a former Guggenheim Fellow and Visiting Fellow at Cambridge, and his specialty is the architecture, design and art of the 18th – 20th century. 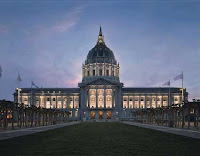 The American Renaissance, Wilson explained, an era in which the United States, trying to prove its maturity as a country, worked to establish its own identity. It was at this point that Americans made an effort to mythologize the country’s history, accumulated the foundations of many art museum’s collections, and began to incorporate the classical elements of Greek and Roman architecture into city plans and civic architecture. Wilson tied the result of this progression into several examples here in the bay area, notably the San Francisco City Hall (left) and civic center, and the Palace of Fine Arts, which remains from the 1915 Panama-Pacific Exhibition.
Wilson is an excellent speaker with a sense of humor, and he held our attention throughout. I’d read quite a bit about city planning and architecture in this period, but he was able to sum it up and populate the story with the personalities of the architects, designers and moguls that drove this transformation in American history.
Posted by kmunson at 5:14 PM No comments: