Signs of Unity: Stories and Symbols of the American Union Label Movement

Recently I was cleaning up some of the old content on this blog, and I was dumbfounded when I realized that I have never posted anything specific about the Union Label project that I have been researching off and on over the last 4 years. This will be a book that analyzes the graphic symbolism used in US labor union emblems, such as the AFL-CIO’s “hand-in-hand” logo, from the beginning of the union label movement in the Victorian era through the present, to demonstrate how these emblems, many of which have changed dramatically during this period, reflect the attitudes of society and of the worker’s self image, and the contribution the unions and their members have made to the fabric of American society and culture.

After the Civil War, American labor unions began using individual logos, both as a means of group identification, and as printed seals or labels affixed to union made products, to assure the consumer of the quality of the products manufactured in union shops. The label movement was also a non-violent means of garnering public support for the labor movement, by encouraging boycotts of products made by companies that did not support labor’s goals. The role symbols play in developing a sense of identity, and their ability to convey, in non-verbal context, important messages about cultural values, is also explored in this work.

Over the decades since the civil war, the symbols and messages contained in these logos have changed due to union mergers, economic transformations, changes in the political climate, and cultural/societal trends in general. Aside from this historical survey, I also plan a reference section that will show all the different versions of these logos (I’m estimating there will be about 200) and whatever information I have been able to collect about their specific use and origin.


How did I get into this, you ask? Well, I grew up in a blue collar family in a small town in Northern Michigan (Manistee, MI). Both my parents were in unions (Atomic & Chemical Workers & the Ladies' Garment Workers) and later I had my own union experiences (IATSE). I hadn’t thought much about it for a long time, and then in 2006 I did the Battle Emblems show at Intersection for the Arts. This show explored 13 well-known graphic symbols used by labor and social movements (like the globe logo of the IWW or the Peace Sign). While I was researching the labor symbols at the Labor Archives at SFSU, I realized that this is a neglected area. Also, people have no real awareness of this history anymore. A friend who teaches Political Science at CCSF assigned an extra credit report about the show to her classes, and we were amazed by the student’s attitudes. They seemed to have little interest in the idea that organizing for a common goal could be an effective way to instigate change, and seemed to think that rights like the weekend and the 8 hour day have just always existed. People suffered and died for these rights, and they deserve to be remembered. 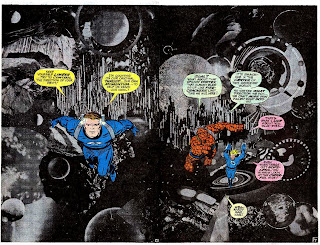 I’m hypothesizing that Kirby used the collages because he was trying to find a way to differentiate our 3D reality from the disorienting and scary yet beautiful negative zone/fourth dimension within the limitations of 2D characters and (not so great) printing technology. The collages evoke feelings of the sublime, in Burke’s sense of terror and awe. Also, the idea of the technological sublime; attempting to show the unshowable (advanced alien technology, the vastness of the universe). Later Kirby experimented with the collages in a short-lived (only one issue) publication called Spirit World (this is one of his collages for it on the left). These collages, even more than the ones featured in the F4, suggest feelings of the eerie and the surreal.
At this stage in my research I can't say that I know specifically what art/collages Kirby might have seen that inspired him to create these. It seems logical that one influence might have been the early British pop artist Richard Hamilton's Just What Is It that Makes Today's Homes So Different, So Appealing? (1956), which prominently features Kirby's cover for Young Romance #26 (October 1950) hung as a painting in the center of the piece. It was widely reproduced, and logically, he must have seen it. My sources, so far, say that he started playing with collage around this time. There are also many surrealist elements, reminiscent of works like Cut with the Dada Kitchen Knife through the Last Weimar Beer-Belly Cultural Epoch in Germany (1919) by the German collage artist Hanna Hoch. Kirby may have been especially affected by these surrealist works due to his war time experiences.
I plan to continue research on this topic and write an article about it in the fall.
Here are some interesting links about these collages:
http://www.twomorrows.com/kirby/articles/13spiritworld.html
http://booksteveslibrary.blogspot.com/2006/03/jack-kirbys-spirit-world.html
http://bullyscomics.blogspot.com/2009/01/fantastic-photo-world-of-jack-kirby.html
Posted by kmunson at 5:22 PM 2 comments: 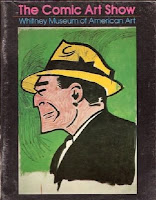 A quick note related to my on-going project exploring the relationships between comic art, fine art and museums: I am currently researching The Comic Art Show, which happened at the downtown branch of the Whitney Museum in New York over the summer of 1983. This show, co-curated by John Carlin (co-curator of Masters of American Comics in 2005) and Sheena Wagstaff (currently the chief curator at the Tate Modern), was one of the first to display comic art and fine art as equal works in a US art museum setting.


August Update: Since I originally posted this, I have presented on this show at PCA/ACA and WonderCon as part of a general "comics in museums" talk, and have more specifically presented on this show with new research at San Diego Comic Con 2009. You can view both of these presentations using the SlideShare widget on the sidebar, or at the bottom of this page. I have written generally about this show in the article Beyond High & Low: How Comics and Museums Learned to Co-exist, which will be published in the upcoming issue of the IJOCA. Since writing that article, I have done research at the Frances Mulhill Achilles Library at the Whitney Museum, and have interviewed John Carlin, Sheena Wagstaff and Anne Philbin, as well as delving into the art scene and art criticism of the 1980's. I expect to complete the article fall 2009.

Update 3/2012 - I have committed to finally finishing my research on this topic and publishing it in the IJOCA for the fall/winter 2012 issue.
Posted by kmunson at 3:10 PM No comments: