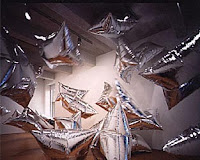 Warhol also collected taxidermied animals (lions, dogs, etc...) which are displayed around the museum. He did "time capsules," a nice art historical way of categorizing his habit of throwing all the paperwork and other ephemera he didn't want to deal with in cardboard boxes and sealing them up when they got full. Apparently, there are hundreds of these, and the museum has a major project in sorting them out. It's hard, looking at it in hind-sight, to remember what a radical visionary Warhol was when he first appeared on the scene. The museum makes a real effort to put Warhol in the context of his time and influences, and I think they did a good job of it.
Posted by kmunson at 2:19 PM No comments: