Comics Exhibition Round Up!

It’s Comic Con time again, and this year it seems like comics related exhibitions and articles are springing up like weeds in a veggie patch.

First, I need to mention that this is the first time I had been to this space, and it was a great place for this particular show. As you enter the building from 8th street (btw Mission and Minna) you walk past a group of people behind a glass partition busy doing something (?) into the store. On this occasion, it was very much like walking into a comics store, with a great selection of artist’s books and back issues of underground comics everywhere. Past the store is a lovely, open space with high ceilings, behind the gallery is a working printmaking shop.

It’s been a long time since I’ve seen original drawings and/or paintings by many of these artists (if ever…). I was immediately taken with the frantic energy of S. Clay Wilson’s pirates, and the whimsical yet subversive work by O’Neill and Mark Bode. As a Wonder Woman fan, one of my favorite pieces was Trina Robbins Wonder Woman pin-up, with the WW II icon showing off her "assets" for the good of the soldiers. 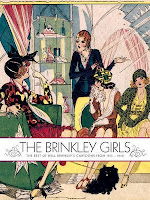 Speaking of Robbins, the show she guest-curated at the Cartoon Art Museum, The Brinkley Girls, was really an eye-opener. I admit, I had never heard of the artist, Nell Brinkley, before seeing this show. It features over 30 lavishly illustrated newspaper tearsheets, magazine illustrations, original artworks and other highlights from Robbins’s personal collection. Brinkley began drawing very glamorous and stylized women for the Hearst newspapers in 1907, and continued on to a 30 year career. Aside from the quality of the work on display, I was impressed with Robbin’s story telling. In the related book Nell Brinkley and the New Woman in the Early 20th Century, Robbins manages to convey Brinkley’s transition from the stereotypical giggly girl of the period to an artist that was willing to take risks by including working women among her romanticized ladies without covering up some of the “warts” that made Brinkely a real person.


The San Francisco Chronicle also jumped onto the Comic Con bandwagon this weekend with a center spread in the book review section by Michael Berry Best Comics – and Comix. In this article Berry covers a wide range of comics and graphic novels, from superhero stories about classic characters like The Best of Simon and Kirby and DC’s Final Crisis collection to character driven works like Adrian Tomine’s 32 Stories and Shortcomings. On the whole this article is a good survey of recently published work, and it mentions several things worth checking out. If I was going to nit pick, I’d say that I wish he had included Art Spiegelman’s revised version of Breakdowns: Portrait of the Artist as a Young…. (Parthenon, 2008), and Spain Rodriguez’s illustrated biography of Che Guevara (Che: A Graphic Biography, Verso 2008). 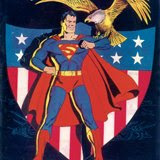 I’ll close with a mention of some other exhibitions I’ve heard good things about:

Strips, Scripts and Scapes at the Riverside Art Museum (LA-ish), features 16 Southern California contemporary artists working in a wide range of mediums with Comics roots. Michael Dooley, my co-presenter at Comic Con, has been raving about a show at the Skirball Cultural Center in LA called Zap-Pow-Bam: The Superhero, the Golden Age of Comic Books 1938-1950. This show features many works of classic comic art from Jerry Robinson’s personal collection, along with toys and promo items, even the Batcycle on loan from LA’s Peterson Automotive Museum. Lastly, I’d like to mention Underground Classics: The Transformation of Comics into Comix 1963–1990, at the Chazen Museum of Art (Madison, WI), co-curated by James Danky and my other co-presenter, Denis Kitchen.