The Bodies are Back by Margaret Harrison

Intersection for the Arts, San Francisco. February 10-April 16, 2010
I'm catching up here on recent shows that I've found really interesting. This review and a couple of the other recent reviews I've posted will be published in hard copy in the Fall 2010 issue of the IJOCA. In this case, I've interviewed Margaret Harrison and gallery director Kevin Chen about this art, and plan to write a more extensive article in the future.

In The Bodies are Back, an exhibition that closed recently at Intersection for the Arts, British artist Margaret Harrison returned to a body of work that she had abandoned in a firestorm of controversy in 1971. Recognized as a pioneer of feminist art, her work tackles complex gender issues in a unique and often humorous way, reconfiguring well-known comics characters, art world icons and objects of consumer consumption to point out the arbitrary nature of the gender roles society assigns to us. In her use of color and line, the influences of 1970’s comic books are clear in her work. While she studied at the Royal Academy of Art (London) in the late 1960’s, a time full of turmoil in reaction to the Vietnam War, she was fascinated by the work of Eric Stanton, intrigued by the sexual freedom seen in underground comix, and surrounded by pop art in every direction.

When she launched her first solo show at London’s Motif Gallery in 1971 she incorporated all of these inspirations and made them her own. She included a gender challenged version of Captain America, a series of nudes represented as products, and two pieces commenting on Playboy publisher Hugh Hefner. After one day, the London police shut down the show for indecency, eventually offering the explanation that people didn’t find the nude women offensive, but Hugh Hefner in a corset and stockings was too much. Harrison heard through the grapevine that the Playboy organization was actually involved, and by an odd coincidence, the Hefner drawing could not be found when the gallery re-opened. Stunned by the controversy, Harrison moved on other work, and left this theme alone for years.

In the 1990’s she returned to this topic. The exhibition at Intersection combined new work with pieces from the 1971 show, ringed around the gallery more or less chronologically, allowing visitors to see how this body of work evolved over time. The infamous Hugh Hefner piece (He's Only A Bunny Boy, But He's Quite Nice Really 1971, 2010 on the left), recreated for the show, started things off on a satirical note. Looking at it now, with the corset, erect nipples, strategically placed bunny head and pipe, it’s hard to imagine this drawing causing a big scandal. In 1971, Harrison included a painting of Captain America (Captain America 1, 1971) in high-heels with strap on breasts to comment on machismo and the US involvement in Vietnam. Captain America 2 (1997, at top of post) continues to question cultural assumptions of gender, as the star spangled Avenger looks like he is springing into action after raiding Marilyn Monroe’s closet.

What's That Long Red Limp Wrinkly Thing You're Pulling On (2009, on the left) is part of a new series of paintings that depict comics characters or other pop culture icons interacting with other well known works of art. In this painting, Lady Deathstrike contemplates de Kooning’s Woman and Bicycle (1952-3) while Captain America crouches at her feet. She holds a red cape, wrapped around his neck, much like a leash. When I asked her about this painting, Harrison told me that she chose Lady Deathstrike not because she is a villain, but because she is a strong, driven female character, and that the de Kooning isn’t meant to be representation of a painting so much as that it is meant to be a reflection of cultural attitude or expectations. Generally, de Kooning’s women are pretty fierce looking and this one has always seemed to me to be the most welcoming piece in the series. If we take the de Kooning at face value, a nice (very tall) lady out for a bike ride on a summer day, what do we find when we contrast her with the dominating Lady Deathstrike? What’s up with the cape/leash? How is the Captain America character reflected in the de Kooning? It’s definitely a painting to ponder. And Harrison herself prefers to maintain the mystery of it. It’s a show that left me with much to think about, and I may never look at Captain America the same way again.

Previous posts (includes video & reviews) here & here.  I presented on this topic at the 2010 PCA/ACA national conference in San Antonio. An in depth article was published in the International Journal of Comic Art in 2011 (Censorship and Superbodies: the Creative Odyssey of Margaret Harrison also on JSTOR). We plan to write a biographical book on her life and work. Please click her name under labels in the sidebar to see more recent posts.

Congrats to SFSU Alum Tyson Washburn on his great work in the Graduate Fellows show at the Headlands Center (this is his Headlands Activation, Ink Jet, 2010 on the left). His detailed and lovely black and white landscape photos evocatively capture the feeling of the ruins of this long abandoned military installation returning to nature. 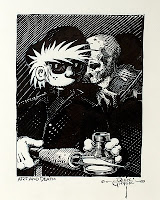 Korean Comics: A Society Through Small Frames, curated by the Korea Society at the San Francisco Public Library (March 13-June 13, 2010)

This exhibition, hung in the library’s large Jewett Gallery (lower level), displayed 83 framed works by twenty-one Korean cartoonists (based in both North and South) to give library patrons insight into contemporary Korean culture. The works shown were all printed pages or reproductions published since the mid-1950’s (no original drawings). I didn’t view the lack of original artwork as any sort of handicap, and felt that seeing the printed pages lent a sense of immediacy to the show. The works explored a wide range of topics including social commentary, historical dramas, fantasies of personal empowerment, action stories, fairy tales, feminist characters and political propaganda. The example on the left is a panel from the newspaper strip Kobau by Kim Seong Hwan.There were many media represented such as newspaper comic strips, political cartoons, children’s magazines, comic books and compilation novels. Throughout the exhibition, reproductions of the panels with English translation were available (and greatly appreciated).

On entering the gallery, one immediately encounters a large cover drawing from Chumŏk Taejang (Fist Boss, published 1958-1994) created by Kim Won Bin (b. 1935, China), depicting a young girl energetically brandishing a huge Popeye-like fist, ponytail and school girl skirt swinging. Possessed of supernatural mental and physical abilities, Kim Won Bin’s young characters were iconic symbols of personal empowerment. Also on display were some panels from the epic serial Four Daughters of Armian (1986-1995) by Shin il-Sook (b. 1962, Korea) whose stories challenged the tradition of preferential treatment of sons and discrimination against daughters. I found it interesting that many of her key characters are drawn as Western style blondes, which she explains as “a way for female readers to indulge their voyeurism.” Also borrowing from the Western style was Park Bong Seong (b. 1949, Korea), whose action adventure works include such titles as Two Year Old Emperor (1983) and A Man Called God (1995-2000). In these stories average people become strong and influential though success in business or government and have James Bond-like adventures.

In contrast to these South Korean stories of personal exploration and power, The Great General Mighty Wing (1990’s), by Cho Pyŏng-Kwon (story) and Lim Wal-Yong (art) is a story of personal sacrifice for the greater good written and published with the encouragement and resources of the North Korean government. In this lavishly illustrated (cover illustration on the left), full color comic series an army of anthropomorphic Socialist bees protect “The Garden of One Thousand Flowers.” The title character became iconic within N. Korea in the 1990’s as a symbol of loyalty to the government and their brand of communism.