Sometime ago, a friend Googled me and said, “In the results, I got all these old Jazz recordings. Is this you?” Actually it is me. Eons ago, when I first moved up to San Francisco from LA, my ex-husband and I owned a small record label called Blue Jazz Records. We recorded pianist George Michalski, the Waterfront Blues Band, Johnny Nitro and the Doorslammers and a few other people. The company itself wasn’t successful, in fact it cost us a lot of money, but other things came of it. I became president of the NARAS chapter, found a steady job at Winterland Productions through Bill Graham, and best of all, I met husband Marc. The other thing that came out of this was work on a huge batch of Jazz reissue CD’s in the mid -1990’s, and these are the recordings that search engines still find.

Orrin Keepnews, the jazz producer who owned Riverside and Milestone Records (Thelonious Monk, Wes Montgomery, Bill Evans, etc…) was a long time board member and national trustee of the SF NARAS chapter. Last I heard, he’s still around and working at 86! Anyway, back in the mid-90’s the major record companies were buying up classic jazz labels and remastering all the music that could be rescued for re-release on CD. For jazz fans, this was a matter of some urgency. Manufacturers of recording tape had tried different formulas and materials at different times in the past, and many of the 2 and 4 track master recordings from the 1930’s and 40’s (even the 1960's) were literally falling apart. Record masters prior to that were recorded on reverse metal plates (remember, we are talking about technology used to press vinyl 78, 45 & 33 RPM recordings). The problem with the metal plates was that they warped, but still the deteriorating tape was a bigger priority.

Orrin was doing a bi-coastal thing. He was not only a respected producer knowledgeable about the artists and the circumstances of all the recordings, but he was also well known as a writer on jazz history. Because of this, he was hired by BMG to work on reissues of the Verve and Bluebird catalogs in New York, and he was also hired by MCA to work on reissues of the Decca, Commodore and Chess catalogs in LA. As he found himself alternating between the two from week to week (at 72!), he hired me as an assistant producer for the LA project, and we did about 20 reissue CD’s together (listed at the bottom).

We did all the digital sessions at MCA’s mastering studios in Burbank. A couple experiences are really burned in my mind. The first was when we played the original 1938 master for Billie Holiday’s Strange Fruit (youtube video). This is probably hard to imagine now that we are accustomed to hearing extremely compressed digital music through tiny (tinny) ear buds, but to hear the lush analog 2 track master recording of this beautiful and haunting song through state-of-the-art recording studio speakers was a transcendent experience. You could close your eyes and imagine her singing into the microphone right in front of you. Unfortunately, the tape was in bad shape. We knew we would only have one chance to capture it digitally and the tape fell apart in strips as it played through the machine. The original was lost forever (but we got the digital capture!). I consider the opportunity to hear it that way one of the more fortunate things in my life.

The second thing was a visit to collector and jazz producer Steve Lasker. This was another unreal aural experience. Mr. Lasker lived in a… I’ll be kind and call it disheveled...house, right on Venice Beach with two huge shaggy St. Bernard dogs and hundreds of pre-tape metal masters. So, we’d sit in this funky living room with the wads of dog hair blowing around on the floor, surrounding a playback system he’d rigged up with an old Pioneer turntable. He would take a roll of quarters, and judiciously place them around to balance out the warping, and do other mad scientist type adjustments. To hear this music from the 1910's & 20’s come to life again was really something. And then the dogs would start to howl along, and we’d all laugh (and sneeze).

Here’s a partial list of recordings, many of these were boxed sets of 2 to 4 CDs:
The History of Chess Jazz - The Commodore Story - Billie Holiday: the Complete Commodore Recordings - Ella (Fitzgerald) : the Legendary Decca Recordings (this was a 4 CD set that had Grammy nominations for Best Historical Recording and Best Liner Notes in 1996) - Lester Young: The Kansas City Sessions - Jelly Roll Morton Last Sessions: The Complete General Recordings - Louis Armstrong: Satchmo at Symphony Hall - Pete Fountain: Do You Know What It Means to Miss New Orleans? - James Moody: Return from Overbrook - Art Farmer: Out of the Past - Ella and Friends - The Nat King Cole Trio Hit That Jive Jack: The Earliest Recordings and Hamp: The Legendary Decca Recordings of Lionel Hampton.
Posted by kmunson at 9:10 PM No comments:

Photographer Tom Griscom will have work in a fascinating project, Sanlun Yishu, a “mobile gallery” in Beijing starting in March. Sanlun Yishu is meant to be an interactive project; the collaborators will trade small reproductions of the work (postcards?) for whatever the participants offer. They will also catalog the reponses and send them back to the artists. This sounds like a great way to stimulate a dialog about art between cultures with people that don’t often have access to galleries and museums. 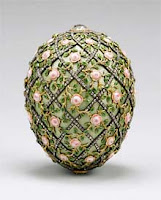 Hannah Sigur has recently confirmed a speaking engagement for FAMSF on March 28th as part of a series of lectures related to the upcoming show at the Legion of Honor, Artistic Luxury: Fabergé, Tiffany, Lalique February 7, 2009 — May 31, 2009. FAMSF's web site describes the show as "the first comparative study of the work of the three greatest jewelry and decorative arts designers at the turn of the 20th century: Peter Carl Fabergé, Louis Comfort Tiffany, and René Lalique. Their rivalry found its stage at the 1900 World's Fair in Paris—the only exposition where all three showed simultaneously and where the work of each was prominently displayed. Some of their most elaborate designs for the Paris World's Fair are reunited for the first time in a gallery recreating the ambiance of this opulent international exposition. Looking critically at the development, design, and marketing of each firm, this exhibition explores how these designers responded to the demand for luxury goods in the years leading up to World War 1."
I have often heard Hannah discuss the important role the world fairs played in helping to expose people in the West to Asian artistic concepts and how this was an inspiration to artists/craftsmen like Tiffany. Hannah will also be signing her book The Influence of Japanese Art on Design .
Bravo to Tom and Hannah!
Posted by kmunson at 11:32 PM No comments:

Happy New Year everyone! Hope you all enjoyed the season!

Husband Marc is on his way down to the AALS (Association of American Law Schools) conference in San Diego this week, to speak to the art law section on a panel concerning comics and the law. Marc is talking about some of his recent research on CBLDF (the Comic Book Legal Defense Fund). CBLDF is a non-profit that represents comics authors, artists, store owners and small publishers in a variety of cases related to censorship or unfair business practices.

Marc's talk will include the Georgia vs Lee case in which Lee, a comics shop owner in Georgia, was threatened with 21 years in prison for unknowingly giving a 9-year-old a comics complilation on free comics day that happened to include a couple pages from Nick Bozzeti 's graphic novel "The Salon," (a must see for arty types) a murder mystery set in 1907 Paris, which featured a few frames of Pablo Picasso painting (and answering the door) in the nude. After many convoluted twists and turns, the case was finally dismissed 10 years and $100,000. in legal fees later.

Marc will also talk about the Mavrides vs California Board of Equalization case. At one point, the California Board of Equalization decided that when comic artists finish their assigned pages and send them in to the publisher, the individual pages should be treated as works of art being sold, and should be taxed accordingly. Mavrides, a comic artist (a contributor to the Fabulous Furry Freak Brothers) became the test case on this. CBLDF defended him, and the court agreed that submitting comics pages to the publisher was more like submiting a finished manuscript, and the state lost.

Marc also has a 90 minute slot speaking at WonderCon in San Francisco (end of February) on CBLDF, the Superman copyright case and other cases related to pop art/comic artist's copyrights. I will also be returning early from CAA to speak on a WonderCon panel about comic art in museums (this was the focus of my master's thesis). Peter Coogan of the Institute for Comic Studies tells me that the panel will include one other scholar writing in this area, and two artists whose work have been included in museum exhibitions. I'll post more specifics as they become available.
Posted by kmunson at 9:44 PM No comments: