I just found out that I will be speaking about comics and museums at another conference, the PCA/ACA (Pop Culture Association/American Culture Association) in New Orleans in April (thanks for the suggestion Hannah). My talk will be entitled Beyond High & Low: How Comics and Museums Learned to Coexist. More on this as the schedule evolves. I haven't been to New Orleans since the flood, so I'm looking forward to seeing what its present condition is with my own eyes.
Posted by kmunson at 12:35 PM No comments: 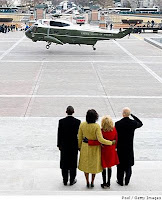 Here's a picture of the moment I've been dreaming of for the last eight years. They were very nice and respectful, but I'm really glad that they made it graphically clear that the Bush era is over.

I liked Obama's speech. Aside from the many things that have already been beat to death by CNN (I won't repeat), I thought, as a non-Christian, that it was great that Obama officially recognized that there are non-believers in this country. After eight years of erosion, maybe separation of church and state will survive after all. I'm not againist people expressing their beliefs, but I hope that the influence of the irrational right will be reduced for a while. I loved the faces of the multi-ethnic multitude in the crowd. If you've been to Washington, you know how vast the national mall seems, and to see it that packed with people was amazing.

Jon Carroll, one of my favorite SF Chronicle columnists, wrote about another small thing I noticed/enjoyed: Aretha Franklin's hat (or "THE HAT") and the new empowerment of all the "church ladies" that wear these hats. Also the comic Bad Reporter by Don Asmussen is actually funny today, quipping "Injured Cheney Confined to Wheelchair for Obama Presidential Inauguration; Denies that Injuries were Sustained Moving Death Ray Out of Office." It was a great moment, to see Cheney driven away in that limo. Sort of like Darth Vader dying at the end of Star Wars (only without the redemption part).
Posted by kmunson at 12:11 PM No comments: