Friday May 1, 2009 from 6:00pm - 8:30pm. Chinese Culture Center, 750 Kearny Street, San Francisco, California 94108 Get Directions
Thirty-one contemporary artists from the Bay Area and beyond interrogate the phenomenon that is modern Chinese culture in the Chinese Culture Center's (CCC) Present Tense Biennial: Chinese Character exhibition. Presented in collaboration with Kearny Street Workshop (KSW) and guest curated by Kevin B. Chen, program director for Intersection for the Arts, the exhibition features a wide array of media including photography, video, painting, animation, sculpture and installation art displayed at both the Center's downtown San Francisco gallery and in a number of satellite storefront windows throughout Chinatown. The exhibition is on view May 1 - August 23, 2009 and opens with a reception on Saturday May 2, 2009 at 1 pm. 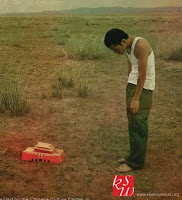 The Biennial is designed to showcase fresh perspectives on contemporary culture in Chinese and Chinese American communities. "This is really a here and now survey of what Chinese means to people - specifically young people," says Chen. "It's young people who have been responsible for the big shifts we see both in China and out here in the Diaspora so we felt that young artists would be uniquely equipped to investigate and question it." And while many of the artists invited to participate are either from China or are Chinese-American, many are not. "When you organize a show around ethnicity, you run the risk of collapsing in on yourself," he says. "So we were intentional about introducing other communities to the conversation." That diversity of perspectives is reflective of the overall impression left by the exhibition. "What we see in this work is that we can no longer generalize Chinese culture," says Abby Chen, program director at CCC and co-curator of the exhibition. "There is really a complexity to what Chinese-ness is these days. The Present Tense Biennial is on view Tuesdays - Saturdays 10 - 4, Sundays 12 - 4 at CCC. Admission to the gallery is free and maps to storefront installation locations are available at the gallery and online. Free. Website: http://presenttense.us/
Photo: Nostaligia No. 24 (detail), 2007. Digital Photograph by Maleonn.
Posted by kmunson at 5:34 PM No comments:


How did the arm & hammer end up on all those baking soda boxes? Art Historian Kim Munson shares her investigation of the origins of the arm & hammer from Greco-Roman myth and its role as an early union label to its current usage as the Socialist Labor Party emblem and as the baking soda trademark. Hosted by the Labor Archives and Research Center, SFSU, 480 Winston Drive, San Francisco, CA 94132. Contact: larc@sfsu.edu Phone: 415-564-4010.
BTW, A while ago I designed an on-line exhibit of union labels for LARC. Some of the graphics in the "promoting the label" section, especially the posters, are really interesting.
Posted by kmunson at 5:09 PM No comments:

PCA/ACA follow up: Masters of Comics and the "Canon" 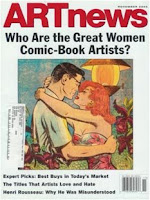 This post is in response to the lively discussion that followed my presentation Beyond High & Low: How Comics and Museums Learned to Co-Exist at the PCA/ACA conference on Saturday. Talking about Masters of American Comics and his choice to pick an all-male (and pretty much all white) “canon,” John Carlin tells Leslie Jones (Art on Paper magazine) that he realizes that the term “masters” seems like sort of an anachronism in this postmodern age and goes on to explain his thinking:

"This is an old-fashioned type of art exhibition that I would never organize or curate if I working in the art field…I really felt that the canon hadn’t been established in a coherent way. This attempts to do that and to create something that people can then criticize and move beyond. To be designated as a “master” for the purposes of this show you really had to combine two things: one was the highest level of craftsmanship and technical mastery… the other was a kind of formal innovation that added something to the medium so that everybody that comes after him, whether they imitate him or not, has to pay homage to his work."

The article continues with more of his thoughts on the artists and works selected for the show. Another useful article, in which Carlin goes into detail about some of the problems the show faced, was written by Scott Timberg for the LA Times. Lastly, there’s the ArtNews article on female comic artists I mentioned. I believe all these articles are available on J-Stor:


I admit that I wish that the curators could have found a way to be more inclusive, but as a researcher/curator myself, I also know that you can never include everything you'd like, and that it's assumed that someone else is either going to argue with or build on your work. Starting a dialog seems to be what it's all about (or is it the Hokey-Pokey? I get confused...)
Thanks for all the great questions!
Posted by kmunson at 4:39 PM No comments: