Just in time for Halloween, NY MoMA is featuring a retrospective of the works of Tim Burton. According to the press release the show "presents artworks and objects drawn primarily from the artist’s personal archive, as well as studio archives and the private collections of Burton’s collaborators. Included are little-known drawings, paintings, and sculptures created in the spirit of contemporary Pop Surrealism, as well as work generated during the conception and production of his films, such as original The Nightmare Before Christmas and Corpse Bride puppets; Edward Scissorhands, Batman Returns, and Sleepy Hollow costumes; and even severed-head props from Mars Attacks! Also featured are the first public display of his student art and earliest nonprofessional films; examples of his work for the flash animation internet series The World of Stainboy (2000); a selection of the artist’s oversized Polaroid prints; graphic art and texts for non-film projects, like The Melancholy Death of Oyster Boy and Other Stories (1997) and Tim Burton’s Tragic Toys for Girls and Boys (2003) collectible figure series; and art from a number of early unrealized projects. Additionally, a selection of international posters from

Burton’s films will be on display in the theater lobby galleries." Concurrently, MoMA will be screening all of Burton's movies, including some rarely seen experimental shorts.

I love Burton's quirky universe, and I'm glad to see this, but I'm puzzled why we see retrospectives of pop culture icons like Burton and concept art from Pixar, but not a retrospective of a key comic artist like Art Spiegelman, who helped reshape the medium. Museum culture moves in mysterious ways... The exhibition will be on view from November 22, 2009, through April 26, 2010. More details here on MOMA's site. 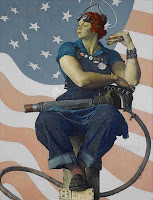 I just read that Norman Rockwell's beloved Rosie the Riveter, which was originally painted for the May 29, 1943 cover of the Saturday Evening Post, has been added to the permanent collection of the Crystal Bridges Museum of Art in Bentonville, Arkansas. It's weirdly ironic that this iconic image of labor has found a home in a museum being built "as a gift to the community" by Alice Walton, the Wal-Mart heiress. Wal-Mart's endless battles with organized labor have been in the news for years.

A recent article on the KGO Newstalk site (thanks Phyllis!) about the estate of illustration art collector Charles Martignette claims that Rockwell's Rosie was sold at Sotheby's for $4.9 million in 2002.

There are more details about the journey of this painting and its new home here in the Arkansas Democrat-Gazette.
Posted by kmunson at 6:30 PM No comments:

In a follow up e-mail about VRAOUM!, Bart from the University of Calgary said: "I just wanted to say that I saw this show yesterday and that it's fairly interesting. Certainly not an all-time great comics exhibition, but far superior to something like Masters of American Comics.
There is a catalogue for 35Euro but it's not very good (very little text).There is also a related special issue of Beaux Arts Magazine that is likely available from their website, which is better than the catalogue and 1/5 the price.
The current comics exhibition highlight in Paris is the Spiegelman show at Galerie Martel which opened Thursday. Lots of interesting material, some of which is still unsold. If you're interested in buying original Spiegelman art, which does not go on sale very often, there are still some lovely pieces available from about 2500Euros up to 24,000."
The Galerie Martel show Bart refers to, Art Spiegelman - From Raw Books To Toon Books, has many great images of Spiegelman's work, including the image on the left.
Posted by kmunson at 11:37 AM No comments: