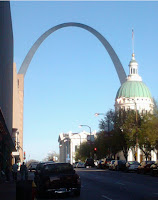 I recently returned from the Popular Culture Association/American Culture Association’s national convention in St. Louis, MO. It’s taken a few days to get to writing about it, because I’ve realized that my feelings about this trip are kind of complicated. The PCA/ACA conference itself was amazing as usual. Hundreds of papers are presented on every Humanities topic imaginable, from Arthurian and children’s literature to vampires and bondage. This particular conference always has a huge contingent of comics scholars, and it’s great to meet everybody and hear their papers. My friend and travel buddy Hannah Sigur was researching and presenting on World’s Fairs (an appropriate topic for St. Louis) and there were interesting papers in her section as well. More about all this in a minute…

Although I grew up in Northern Michigan, travel over the last few years tends to take me to the edges of the country: west coast, east coast, New Orleans, Texas, etc… Except for the heart of Chicago, I haven’t been to the actual mid-west much at all. Like most of us, I’ve read horror stories about the impact of the economic downturn on the nation’s center, but I haven’t seen much of it. Things in California are complicated enough! 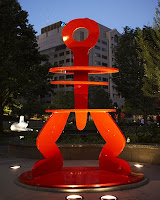 St. Louis is a proud city. Once Chicago’s equal in power, architecture and creative energy, the city has had a steep decline over the last couple decades. Block after block downtown was full of impressive and stately buildings, boarded up and paddle-locked. Even the Rams, a Super Bowl team as recently as 2001 (“The Greatest Show on Turf”) have been sucking and have the first round draft pick this year, much to the dismay of every cab driver I spoke with. The city is working hard to come back. They have converted many of the grand skeletons downtown into inexpensive lofts, and people are starting to move back. There’s a new sculpture park downtown, CityGarden, with an excellent restaurant (The Terrace View). The garden features a spectacular array of public art (the photo on the left is Untitled-Ring Figure by Keith Haring), and a series of terraced fountains meant to represent different regions of Missouri. The riverfront park around the famous arch was lovely, and busy. Baseball and casinos are popular. Everywhere trees were budding and blooming and it seemed that life was returning. I hope it does. 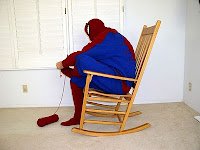 So, back to the highlights of the conference. I enjoyed Diana Green’s session, and also enjoyed getting to know her after seeing her name for so long on the comics scholars listserve. We chatted over drinks and dinner on many topics, and I was amazed by her encyclopedic knowledge of comics and her dry wit. The comics area chair, Nicole Friem, gave a sort of “state of the union” summary of how she’s seen comics scholarship evolve over the years she’s been the chair, and trends that she thinks are on the horizon. Randy Duncan (The Power of Comics: History, Form and Culture

), who moderated the session I participated in (I presented on my latest research on The Comic Art Show), focused on a 17th century Ethiopian illuminated manuscript telling the story of the miracles attributed to the Virgin Mary that he came upon while touring the Chicago Art Institute. He successfully tied the illustrations, sequential narrative and captions to other ancestors of modern comics, and as an art historian I loved it. Hannah's presentation with John Findling on the Columbian Exposition (Chicago, 1893) was excellent, and I also enjoyed getting to know John. We were also treated to a special artist’s presentation by Mark Newport, who KNITS life size superhero costumes (and wears them in photos and performance). He was organizing a knit-in at a gallery during the conference, and I'm sorry I missed it. On the left he's wearing his Spider-Man costume (Self-Made. Color photograph, 2004. Edition of 5. 24" x 36"). 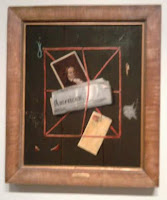 ne last thought, as usual, about the St. Louis Museum of Art, a small museum set in Forest Park in one of the last remaining buildings preserved from the St Louis World’s Fair in 1904. They had a nice collection for a small museum. I was pleased to find an altarpiece by the Florentine painter Piero di Cosimo for the private chapel of his patron Francesco del Pugliese, who are a peripheral part of my arm & hammer project. I was also fascinated by this 1887 painting by John Fredrick Peto (to the left) of a wall posted with mail and a newspaper (Rack Picture, c 1887, oil on canvas). I couldn’t help thinking of pieces like Stuart Davis’ 1924 painting Lucky Strike or recent paintings by Mark Stock (who paints in the trompe l'oeil genre and references comics frequently). If you ever go to this museum, however, avoid eating in the restaurant, it’s really awful.
Posted by kmunson at 2:23 PM No comments:

The Bodies Are Back - Show Extended

Back in January, I posted about the truly astonishing exhibition of the art of feminist/pop art pioneer Margaret Harrison at Intersection for the Arts The Bodies are Back, which has just been extended through April 16, 2010. On the left is her Ejaculo, 2007, Watercolor, colored pencil, and graphite on paper (courtesy of Intersection for the Arts, © 2007 Margaret Harrison).

I am fascinated with the use of comics characters and other pop culture references to comment on gender and sexuality in these thought provoking works. Her dramatic story of censorship (her first showing of these works was shut down in by the police for indecency in 1971), success and eventual return to this theme is very interesting. I plan to write a longer article about this.

In the meantime, there have been many reviews including an interview with Jolene Torr on ArtSlant, SFGate, StarkSilverCreek, Mission Eyes (includes video), SFStation, and SF Weekly.

Harrison also tells me that some of her work has been selected to be included the Tate's Rude Britania show this summer (my post is below).
Posted by kmunson at 1:46 PM No comments:

Marc on KCBS about ipad

Yesterday Marc (law professor husband) was interviewed on KCBS talk radio about a potentially sticky dilemma faced by people developing content for the ipad. The ipad, unlike the Kindle and other tablet format reading devices, allows images. How will rights and permissions work on this new platform? The question was sparked by this article in the New York Times by Mark Aronson, suggesting that image creators be paid by the download. Complications galore!
Posted by kmunson at 12:45 PM No comments: