Once Upon a Dream at the Cartoon Art Museum

This excellent exhibition at the Cartoon Art Museum celebrates the 50th anniversary of the release of Disney’s visual masterpiece Sleeping Beauty. On display are concept paintings, model sheets, cels, production drawings, color keys, photos and other ephemera that tell the story of the making of Sleeping Beauty from design concept through the finished film. Sleeping Beauty was a Disney milestone: a Technorama 70, 6-channel stereophonic vision of the Perrault fairy tale that took over five years and $6 million to make. Stunning as it was visually, the film cost so much to make that it lost money when it was released in 1959, even though its box office take was only beaten by Oscar-winner Ben Hur. The film had a comeback with the 1979 & 1986 reissues, when it finally took its place among the rest of Disney’s classic (and money-making) films.

Unlike many Disney features, the visual style of Sleeping Beauty was driven primarily by one man, supervising color stylist/inspirational sketch artist Eyvind Earle. Earle was a painter and greeting card designer that was hired at Disney in 1951. Earle painted backgrounds and concept paintings for shorts like The Little House and Toot, Whistle, Plunk, and Boom and the features Peter Pan and Lady and the Tramp. When Walt Disney decided he wanted to do something with a completely unique look, he took a chance on Earle, and gave him unprecedented control over the project. 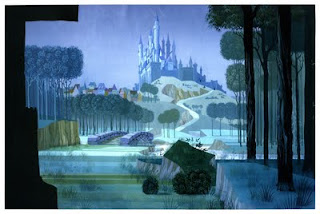 Earle created a “medieval tapestry” inspired by the paintings of Durer, Van Eyck, Breughel, and 15th century French illuminated manuscripts, especially the Tres Riches Heures de Jean, Duc de Berri, as well as Persian miniatures and Japanese art. Another influence was the minimalist, streamlined style of 1950’s graphic design. Many of Earle’s concept and background paintings are featured in this exhibit. I was spellbound by the contrast of the stylized sharp angles, rich color palette, and dense detail work. At one point in the exhibit, there is a concept drawing by Mary Blair for the cover of a Sleeping Beauty storybook, and it’s interesting to contrast Blair's whimsical style with Earle's, and imagine how different the film would have looked based on Blair’s designs.

Many of the animators, which included the famous Nine Old Men and Production Designer Ken Anderson, were concerned that the backgrounds were too cold for a romantic comedy and that the detailed backgrounds would swallow the characters. This struggle is mapped out in a series of model sheets and character concept sketches that show the amount of work that went into finding character and costume designs that would stand out against Earle’s grandiose backgrounds. Of particular interest in this section of the exhibition were drawings of Princess Aurora, who was loosely based on Audrey Hepburn. The princess presented special problems as she has only 18 minutes of screen time to establish herself as the sympathetic heroine before she's fated to meet up with that nasty spinning wheel and sleep through the rest of the film. On top of that, she is living in the forest when the character is introduced, and is dressed in a muted wardrobe that echoes the natural surroundings. The drawings show the character's progression from forest maiden to a princess regally attired in blue or rose colored gowns. Also of interest were different versions of the 3 good fairies, a photo sheet of Maleficent’s two-horned “devil” headdress from every conceivable angle (the animators had a really hard time drawing it), and photos of the "live cast" who acted out the characters for the animators, enabling them to achieve more realistic movement in their drawings.

Much of the work featured in this show is drawn from the collection of Ron Dias, a Disney artist/illustrator whose first professional job in the animation industry was as an in-betweener and clean-up animator on Sleeping Beauty. Dias went on to become one of the most highly-regarded and sought-after background artists and color stylists in the business. The exhibition includes a spotlight section with a selection of Dias’ own work, such as background paintings and color concepts from The Secret of Nimh, Who Framed Roger Rabbit, and The Little Mermaid.

Photo: Production cel of the evil witch Malificent (animated by Mack Davis) and a concept drawing of Sleeping Beauty's castle by Eyvind Earle, courtesy of the Cartoon Art Museum.
Posted by kmunson at 4:28 PM 2 comments:

Beyond High & Low in the IJOCA

My article Beyond High & Low: How Comics & Museums Learned to Co-Exist, has been published in the Fall 2009 edition of the International Journal of Comic Art. Thank you John Lent, for finding my piece on the "paper table" at PCA/ACA New Orleans last year and inviting me.

Beyond High & Low is about art world politics, modernism, and how The Comic Art Show (Whitney, 1983), MoMA's High & Low (1990) and Masters of Comics (2005) built on and responded to each other, as well as a few lesser known shows and some exhibition strategies. Since I wrote this article, I've done extensive research and interviews about The Comic Art Show. This was the show that brought Art Spiegelman, John Carlin, Brian Walker and Ann Philbin together, and helped launch Sheena Wagstaff's career, as well as being the first show to display comic art and fine art as equal works in New York museum setting. I was beginning this research when I presented at SDCC in July, and will be presenting on the finished paper at PCA/ACA in St. Louis in March.

IJOCA articles are not published on line. If you are interested in a hard copy or subscribing to the IJOCA, their site is here.
Posted by kmunson at 2:38 PM No comments: