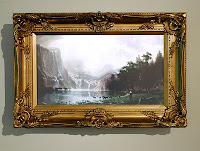 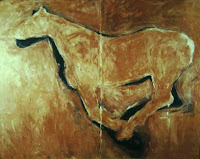 Also on view at the O’Keeffe were works by the contemporary painter Susan Rothenberg. Known for her abstract horse paintings (such as Cabin Fever,1976, shown on the left), it was interesting to see a wider range of her work. In one series of paintings, she depicts over head views of situations in nature she came upon while riding her horse. Dogs Killing Rabbit, a monumental oil painting from 1991, makes use of wild brush strokes and surface texture to capture the violence of the moment. She is also able to harness and internalize this energy for more meditative pieces, such as her Folded Buddha (1987-88).
After a day full of galleries and window shopping, we were very happy to discover the Margaritas at the Del Charro Saloon (corner of W. Alameda & Don Gaspar). We got on a nice buzz at this warm and friendly place, and it greatly enhanced the train ride back to Albuquerque.
Posted by kmunson at 9:22 PM