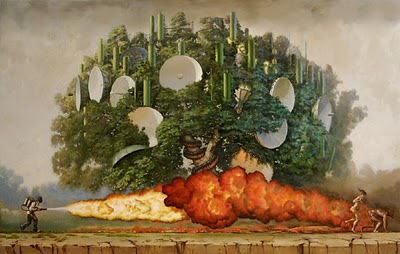 I was happy to stumble upon Scott Greene’s solo show Capitulare de Vita at the Catherine Clark Gallery (in SF, through August 21), as I had seen his fascinating painting Ship Shape at the Albuquerque Art Museum when I was there in February. I had no idea then that Greene, a graduate of CCA in Oakland and SFIA, had roots in the Bay Area. Above is his oil painting Expulsion II (2010, 48 x 76 inches).
When discussing this painting in a recent review in the SF Chronicle, Kenneth Baker writes “Expulsion II reprises a scene often depicted in European art: Adam and Eve's expulsion from the Garden of Eden after the tasting from the Tree of Knowledge. Greene's divine bouncer - no mere angel with a flaming sword - wields a flame thrower. The fleeing Adam, an apple still in his mouth, goes down on all fours, hinting that the Fall reset Homo sapiens' evolution.” I agree with Baker, as far as he goes with this, but I think there is more to this intricately detailed work than that. In a "corporatocracy" (as Greene would call it), we are lulled to inaction and complacency by our endless hunger for information (or knowledge), fed by the net, our cell phones and our satellite TVs, apathetic to the growing threats to our way of life. In Greene's painting, the "snake" is a thick cable, luring/linking us to all this technology. To me, Greene’s “divine bouncer” is an eco-terrorist, a harbinger of ecological disaster (what if the oil spill in the gulf went up in flames?) or a symbol of global warming, which could someday drive us from the garden, leaving us to begin again.
Elsewhere in Baker’s review, he contrasts Greene’s painting with computer animation, and wonders if “Greene's art makes us ask whether history and technology have finally consigned handmade representation to the status of hobbyist nostalgia, like, say, scrimshaw. The question has arisen repeatedly since the invention of photography, and contemporary painting remains haunted by the prospect of ultimate obsolescence.” It seems we are back to the old “painting is dead” idea (or maybe just "resting," like Monty Python's "late parrot"). Maybe I am particularly sensitive to this argument because I spend a great deal of time focused on comics, another art form whose demise is rumored to be either averted or hastened with every new technological innovation. I feel strongly that artistic skill and narrative storytelling will always have a place, especially in the area of political and social commentary. While we may all enjoy the current offerings by Pixar and Dreamworks, or mixed media pieces in the gallery, Greene’s works, like well-crafted political cartoons, capture the moment, and make us think. What does Baker think the foundation of computer animation is? I’ll tell you… handmade concept drawings

by talented artists that are great storytellers. Humbug.
Posted by kmunson at 11:18 PM